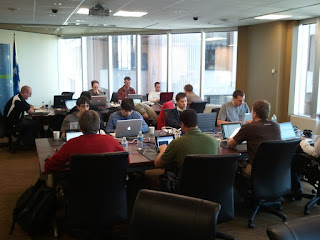 This week, Montreal was the host of OSGeo's 2011 Code Sprint where 29 OSGeo project developers and contributors from North America and Europe spent four intensive days working and meeting face to face for the advancement of their respective projects.
This year's sprint included teams working on the following projects: MapServer, GDAL/OGR, PostGIS, libLAS, ZOO Project, TinyOWS and GeoPrisma. In addition to the actual coding and project meetings, those sprints provide a unique way to build and maintain synergies between the projects and their developers.

On the MapServer front, the focus was on the 6.0 release. MapServer 6.0.0-beta2 should be released later this afternoon with the outcome of the sprint work.

Ruby bindings for MapServer and GDAL were brought back into maintenance, and some enhancements were made to the Oracle (OCI) driver in OGR.

The LibLAS group has been planning and setting up the bases of the new libPC (PC for Point Cloud), which will provide a generic interface to point cloud data formats. Think of libPC as the GDAL of point clouds.

The PostGIS team moved closer to the PostGIS 2.0 release with core changes to indexes, better support for raster map algebra, and several tickets closed on shp2pgsql.

The ZOO Project team worked on a new WPS service for athmospheric dispersion to simulate the dispersion of the cloud that spreads from the Japanese nuclear power plants. The team also made some good progress (testing and docs) towards the upcoming ZOO 1.2 release.

A MapServer mapfile parser has been added to TinyOWS to directly read the layer configuration information from a MapServer mapfile. This addition will significantly facilitate the use of TinyOWS as a WFS-T to complement MapServer.

The GeoPrisma team got together to add support for two new service types (OGC WFS and WPS), as well as fixes to the print widget and some general security issues. They also started to build demos integrating the latest version of most projects present at the sprint including: MapServer, TinyOWS (with mapfile support), GeoPrisma, Zoo-Project and WKTRaster. Stay tuned to see this demo in action (link not available yet).

And of course there was the social side of the program, with a hockey night on Thursday, and hours of talk and lots of new ideas exchanged informally during the social events each night. 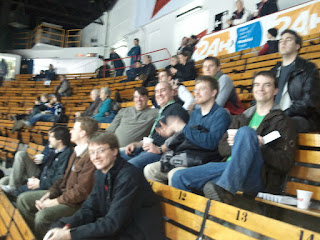 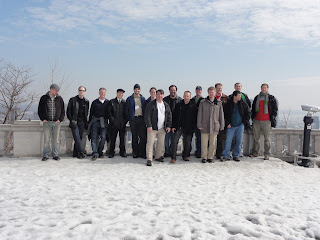 Once again, thank you to our sponsors and to our host for making this event possible, and to all the participants who made this a success.

Finally, there are already talks about the 2012 Code Sprint which is likely going to take place in Seattle (see here).

P.S. More pictures from the sprint are available on flickr.
Posted by Daniel Morissette at 2:19 PM